“Crush up aspirin with vodka to make an exfoliating facial scrub!”

The internet has changed culture the world as we know it at a blinding pace.  Back in the day (everyone over the age of 26 will say while swaying hypnotically on a rocking chair) before internet was everywhere, things were different.  We’d use a phone book to call businesses, bar arguments about which Bond movie had Christopher Walken as the villain ended in frustrating stalemates (both parties were wrong, the answer is A View to Kill, not Moonraker or Octopussy), and pornography had to be purchased in magazine form with a cashier taking your money as you shyly avoid eye contact.  It was a simpler time.

Ever since the Internet has become the all-encompassing entity that will someday eventually spell our species’s doom, it has brought a lot of information into our everyday lives that we would never have known otherwise.  Sure, 90% of this information has to do with sexual fetishes that we wish we didn’t know existed, but it also means that the combined human experience can be distilled into life hacks; little common sense cheats that make life easier and make you say, “Oh, of course, why didn’t I think of that?”

“Oh my God, that somehow manages to be ingenious and depressing at the same time!”

Roughly 70% of life hacks are about either fingernail painting techniques, amplifying the volume of music played on your iphone, or freezing things that aren’t water to make things cold without watering it down, but all life hacks, when done right, make you go, “Oh shit!  That’s kind of cool!” even though you’re almost guaranteed to do nothing with this newly acquired information.  And they are cool!  The first time you hear that Chinese take-out boxes can be folded out into plates, you lose your fucking mind for half a second.  And when we finally realized that the markings in Solo cups measures your serving size for shots, beer, and wine, a few of our staff members actually wept out of sheer joy.

However, for every game changing life hack, there are others that, well, let’s just say, were explicitly designed by people who would sneak into your bathroom and replace your mouthwash with castor oil, because they’re, well, they’re crazy.  They’re crazy people.

“My apartment is filled with them!  Broken umbrellas, as far as the eye can see!”

One of the biggest issues with the concept of life hacking is that it tends to follow Pinterest logic—it looks great in artfully crafted photographs staged by competent designers, but when your average Joe tries to do it he’s going to look like a jackass.  And hey, if you’re fine with the fact that your “iphone playing music in a cut up toilet paper roll” is probably going to look janky as hell, but you still want to amplify your Pandora channel, go for it, no one will judge you.  Well, they’ll judge you by saying things like, “That looks janky as hell” but no one is going to think you’re a goddamn crazy person.

Unlike these life hackers.  Because, you know.  They’re goddamn crazy people.

Every Hiccup Remedy Will Make You Look Insane

We’re not going to link to the Buzzfeed article on life hacks that had this series of comments, because we’d like them to know how Reddit and Tumblr feels for once, but basically any article on a major website that posts life hacks will invariably be filled with people saying, “Sure, using a pop-top to hang a picture is pretty neat, but check out this neat little trick that I swear by” and most of those people are insane, because 110% of internet commentators are fucking nuts.

Now, you add that to the fact that every home remedy for hiccups is batshit crazy and you have a really great breeding ground for life hacks that involve either almost drowning yourself (hey there Nadine Hearity, stop searching for yourself on Google) or taking a shot of vinegar every time you have a temporary diaphragm episode or, or, carrying said vinegar with you at all times just in case you, God forbid, come down with the hiccups in public, Kerri-ann Page, you absolute dropped cereal bowl of a person, you.

Scotch Tape Should Not Go Near Food 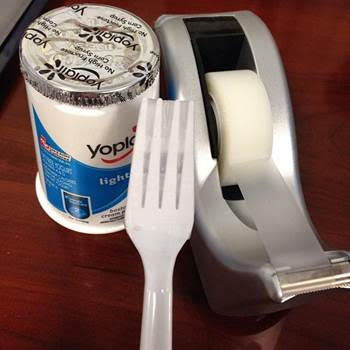 Now, we’re not saying that this person suffers from a weakness of mental facilities or anything, but we are pretty sure that this is probably the worst spoon that’s ever been created.  The damn fork itself would probably be a better option for scooping up that yogurt than what we see here.  But at the very least, we have a case of temporary insanity.

This Many Almonds Is Way More Expensive Than One Damn Aspirin, Right? 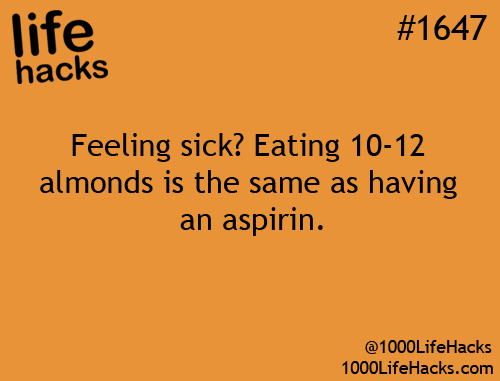 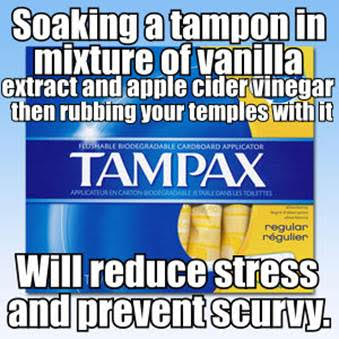 There are far more tampon-centered life hacks out there then there really is any reason to be, and we believe we will never know for sure if they’re meant to be taken seriously or not.  Take the above example—everything about that screams “they are trying to find gullible people to rub moist tampons on their temples” but we’ve also established that a certain amount of the population is stupid or crazy enough to totally do that and then rave about how much it works immediately after.  And don’t get us started about that (totally bullshit) claim you can soak a tampon with vodka, stick it in your who-haw, and get drunk (while being able to fool a breathalyzer).  Yes, that one is a life hack, but it’s probably more Darwinian in nature than anything else.

Heh.  Full disclosure, we primarily posted this for the dick joke.  Heh, cover your stick, heh.  That said, this hack is practical in the same sense that walking around wearing a wolf mask all day to scare away potential muggers is—it’s not going to come in handy very often, and everyone who sees it is going to ask, “Um, why is there an upside beer coozie on your stick shift, heh, stick shift, heh heh heh, but no, seriously, what’s the deal?”

The gear shift is one of the least obnoxious things to overheat in your car, because you can touch it for like two seconds and have it return to normal.  Here’s a rough list of things that you’d want to cover to keep cool on hot days, in descending order.

4:  Your baby, oh God why did you leave your baby in the hot car

5:  Your dog, Jesus Christ, you’re a monster, an honest to God monster, you should burn for this

13:  The beer coozie you put on your stick shift for reasons that don’t even make sense when you explain them

This is dumb.  Do not do this.

Not Everything Needs Utensils.  Just Use Your Damn Hands.

This will likely be our most controversial entry here, but hear us out.  Half of you no doubt saw this and went, “Oh, of course, it makes perfect sense!  This is a great idea!  I’ll just use my tongs to get great lemon squeezes, wow, thanks internet!”  But no, you’re simply being blinded by the bright lights and lilting music.  This is bullshit.  This is pointless bullshit.  Because if you’re cutting your lemon in half already, it’s honestly easier to just squeeze the fucker.

Just squeeze your lemons with your damn hands.  Do it.  Shut up.  Don’t be the person using thongs to make lemonaid.

This Is Some Rain Man Shit Right Here 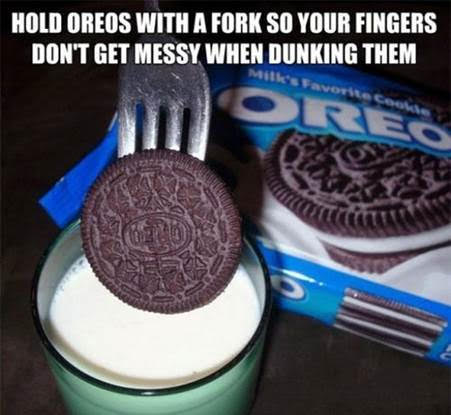 This person, at best, does not have their priorities straight.  This person probably has bodies in their basement, but if we’re going to be optimistic, they at least do not have their priorities straight.  Who the fuck eats an Oreo with a fork other than someone who is actively deranged?  Who’s out there, getting their hands messy dunking fucking Oreos?  If we were to make a list of what acceptable fears and concerns in life would be, here’s where “messy hands from dunking Oreos in milk” would rank.

39,392:  Your waitress kind of looks like your ex, and you stared at her a half second too long when she first came over, and maybe she knows that you think she looks kind of like your ex.

39,393:  Some people own ferrets as pets, and some ferrets bite people, you might someday meet a pet ferret and it might bite you.

39,394:  When dunking an Oreo in a glass of milk, you just, like, submerge your whole fucking hand in the sumbitch, and it’s a goddamn mess.

Here is that same list, according to someone who really can’t deal with dunking their Oreos without a damn fork.

5:  Your friends and family are out to get you, trust no one, they are sinners and thieves.

6:  The government is listening to your thoughts and using your dirty, awful, bad, no good animalistic urges to sell you underwear on TV.

7:  When dunking an Oreo in a glass of milk, you just, like, submerge your whole fucking hand in the sumbitch, and it’s a goddamn mess.

8:  They all will pay, even the innocent.

9:  The world, theoretically, could be taken over by bees.

This Totally Wouldn’t Work.  This Won’t Work, And You Are Crazy For Trying This.

There is absolutely no way that is correct.  Do not listen to these people.  These people are goddamn psychopaths.

We Suspect Some Life Hacks Exist To Kill You

The important thing to remember with all life hacks, and not just the ones on this list, is that many of them are the brainchild of people who have too much time on their hand, and who might not think things through.  So yes, you can think, “Oh wow, that’s a much better way to store my clothes than I was doing previously” but don’t let the fact that life hacks are not stupid 10% of the time blind you to shit like the “hacks” in this article.

Like this tree, made out of books up here.  Yes, that one that will take roughly two hours to assemble and five hours to disassemble because you’ve filled up your extra bookshelf space with random shit during the three months after  Christmas you spent procrastinating and not taking this down.  Not that it’ll last that long—we’d say, give it about one week before you accidentally stumble into it, and are crushed to death in an avalanche of heavy books with sharp corners.

Which ultimately will teach you the best life hack of them all.  Don’t get killed by life hacks.