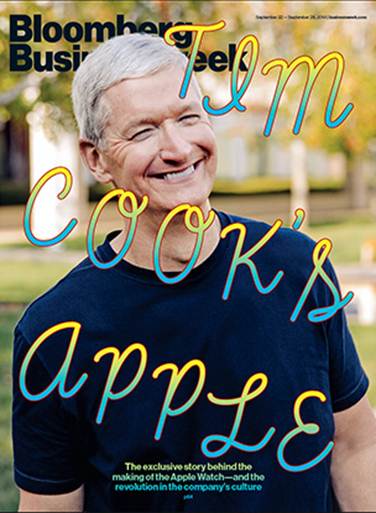 Just give that a real good stare.  You might be wondering, “AFFotD, why did you photoshop this awkward and obviously fake Bloomberg Businessweek magazine cover?”  Oh, oh you could not be more wrong.  Ladies and gentlemen, we present you, the actual, real-life Bloomberg Businessweek’s cover story about Apple’s Tim Cook.  No, we’re serious.  Yes, they intended for it to look that way.  Yes, they put that on the front of something that they then expected people to buy.  Like, with real money and everything.  We know.  We know.

We had to keep going through various articles of Bloomberg Businessweek because, come on now, that can’t be for real, can it?

But it is.  It is very real.  And Bloomerg clearly has just run out of fucks to give. 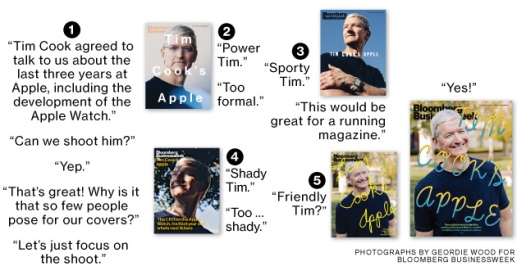 Bloomberg Businessweek not only created the cover above, they were so proud of it they decided to have a whole page dedicated to how the cover got made.  We’re actually starting to cross from “not giving a fuck” to straight up trolling here.  They seem so excited!  That final “yes!” takes on an almost sinisterly naïve tone when it’s read earnestly.  And throwing around “why is it that so few people pose for our covers” takes on a note of hilarity when you see the final result.  No, seriously, look at it.

This was their fourth photo option.  They seriously considered three photos before going, “Okay, let’s stick with the one where he’s like, closing his eyes like he’s trying to suppress a bad sexual memory, with his mouth stretched out a terrifyingly long distance beyond where his teeth stop, because someone once told him that this is what hu-mans look like when smiling to express pleasure.”  Then, they decided to go with a font that literally screams “look at this website I made on geocities, the year is 1997, and what do we do about this upcoming Y2K situation?”

This is not an outlier.  Bloomberg Businessweek does not give any of your fucks, and the more they post graphic design work that looks like an example of “what not to do” in a Photoshop class, the more they’re clearly bragging, “We paid someone to do this, and you paid us to bring this into your homes.”

This cover was made because the tired, bored, and slightly embittered graphics people at Bloomberg tossed their arms up and said, “Let’s put gold bars in a Hilton robe, because the cover title is ‘Gold at the Hilton!’”  That’s not us being glib, that’s literally what they say explicitly said in their “how this week’s cover got made” article, which, at this point, has to be fucking with us right?

They then decided this wasn’t quite cheesy enough as a cover, so they turned it into a gif, complete with glowing gold effect, because gold glows maybe (note to editor—does gold glow?  We don’t think gold glows.  Please check and confirm before posting).

And now, here’s a raccoon next to a garbage can. 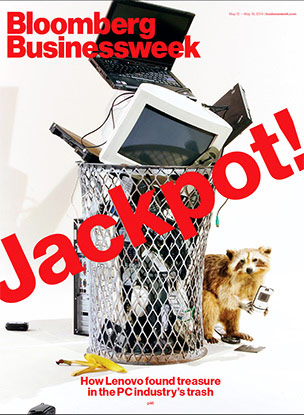 There’s really no insight to gleam from the covers of Bloomberg Businessweek, other than, “Magazines are a dying art form.  Asking for Bloomberg Businessweek to give a fuck or two with their covers is like asking a Western Union employee to be really passionate about the money wiring industry.”

Anyway, we’re going to post more covers, because they’re absolutely hilarious to us.

Ha ha ha, holy shit!  You know you’ve hit a special level of “whatever” when you just start putting massive green and floppy red penises on your cover.  This is amazing.  This is the best cover in the world, because we love penis jokes just, so so much.  Also, we’re imagining the kind of people who still get magazines (read as: old people) and would like to imagine that about 30% of Bloomberg‘s subscribers were blissfully unaware of the penises starring at them from their coffee table for that week.

Whaaaat?  Bloomberg, you can’t just put a picture of a severed bear’s head snarling and put “Grrrrr” in off-kilter pink letters, wipe your hands, and say, “There we go, we got it, we got a cover people, good work everyone, time to go home and fuck our spouses, let’s chalk this one as a win.”  You can’t do that, and yet, here we are.

“Chief, chief, I got a scoop for us, it’ll be perfect for a story!”

Well, don’t just stand there with your dick in your hands, Johnson, spit it out!

Dammit, Johnson, I know that!  I’m the editor-in-chief of Bloomberg Businessweek, the second most respected purveyor of dick jokes aside from America Fun Fact of the Day!

“I know that sir, that’s what I wanted to talk to you about.  It’s the cover image, sir.  I was thinking…”

Dammit, Johnson, I’m running out of patience!  What’s the idea?  Out with it, son!

“Sir, we have the cover say ‘Let’s Get It On’ and then photoshop a picture of a Continental airplane straight up fucking a United Airlines plane.”

…You goddamn son of a bitch, Johnson.  That’s the best idea I’ve heard since that hedge fund article that had the dude with two dicks!  You’re promoted!

They say that sex sells, and to some extent that’s true.  Men, for example, largely enjoy seeing boobs.  At least 80% of them are pro-seeing-boobs, maybe even more, we’ve not done the research.  But you know what’s even better than boobs?  Boobs with a tiny man in the middle of being the “Y” in a rendition of the Village People’s “Y.M.C.A.” just, wedged in the cleavage.  That’s a little something called the perfect magazine cover.

Listen, we’ve established that Bloomberg Business does not give a fuck.  However!  They really love bears for some reason.  They’re all about bears.  So when they get a chance to put a bear on the cover, even if the logic behind using a bear isn’t entirely there, they will do it.  Apart from the “Um, why is a Bear on their Olympics article” aspect of this, though, it’s actually kind of a bitching cover.  So kudos there.  We would change the title of this article to “Bloomberg Businessweek has stopped giving a fuck, unless bears are involved” but we don’t give enough fucks to go up and make that change.

We told ourselves that the moment this got dark, and not fun, we’d stop.  It looks like that time has come.  Just as Bloomberg Businessweek has stopped giving even half a fuck, so too must we.

One response to “Bloomberg Businessweek Has Stopped Giving a Fuck”