Harry Truman was born in 1884.  He served in World War I before going into politics, where he became the 33rd President of the United States.  He held that office from 1945 to 1953, and he died at the age of 88 in 1972 in Kansas City, Missouri.  Harry Randall Truman was born twelve years later in West Virginia, also served in World War I, and went on to live a pretty similar life to his presidential namesake, only instead of leading the free world, he lived in a cabin near Mount St. Helens with 16 cats and got buried under hundreds of feet of mountain debris after stubbornly refusing to leave his home during the nation’s deadliest volcano eruption.  So, they’re pretty much the same dude.

And while there are hundreds of books about President Truman, there’s less literature on Harry Randall Truman, the man who became famous for a few months for saying, “Fuck you, volcano, come at me, bro,” until the volcano, you know.  Came at him.  Bro.  So let’s take a moment to recognize a proud American who loved his home while failing to fully comprehend how volcanoes worked.

Harry Randall Truman was a minor celebrity during the two months of volcanic activity that preceded the Mount St. Helens eruption on May 18th, 1980.  For those readers who might not have been drunkenly conceived by this time, we don’t live in the time of Pompeii and Mount Vesuvius, so we know enough about volcanoes not to be too surprised when they erupt.  Meaning, there was a full month-long period where people were saying, “Huh, so this active volcano is getting rocked with hundreds of earthquakes.  It… might explode.  That would be bad.”

But first, a little something about the man behind this event.  Or rather, under it now.

We’re pretty sure that’s a glass of bourbon right there, just saying.

Harry Randall Truman was born on October 30th, 1896.  His mother possibly might have given birth to him squatting over a pool of lava as a sadistic test of reflexes to see if she was quick enough to catch the newborn baby before he fell into the bubbling maw, but that’s just conjecture.  What we do know is that, at the age of 20, he joined the United States Army, later surviving the torpedoing of the Tuscania on February 5th, 1918, which again might have instilled his belief that he was immune to melting.

He was honorably discharged the following year (as opposed to lava, which tends to discharge in a very violent and dishonorable fashion), and in 1926 he became the caretaker of the Mount St. Helens Lodge beside Spirit Lake at the foot of the volcano.  Essentially, he was Pierce Brosnan in Dante’s Peak, only he didn’t survive at the end of the movie and honestly it’s been so long since we actually saw Dante’s Peak that we have no recollection on what happens in it other than those two skinny dippers dying in the hot springs at the beginning.

Oh shit, Sarah Connor was in that movie?

Truman lived by Spirit Lake for the rest of his life (spoilers), which included three marriages and sixteen cats (sixteen goddamn cats) and didn’t know any life other than watching over his property at the edge of an active volcano, so when mother nature started flicking the lights on and off around Mount St. Helens like an impatient elementary school teacher trying to get the attention of an unruly class, Truman interpreted these “get the fuck out” signals as a challenge.  A challenge to which Truman replied with an admirable, “Fuck you, nature.”

We can’t say we disagree with the sentiment but we tend to pick battles that are a little less one-sided.

“Yes, it seems to be Dante.  Dante’s Peak, sir.  It’s all… volcano-y.”  Man how does NO one on our staff remember what happens in this movie?

Harry Randall Truman steadfast refused to leave his property while Mount St. Helens was ready to go all nuclear, just like that one scene probably in Dante’s Peak which, again, we really don’t remember the specifics of.  He felt that the media was blowing (hah) the whole situation out of proportion, telling reporters, “I don’t have any idea whether it will blow…But I don’t believe it to the point that I’m going to pack up.”

At 83 years of age, Truman didn’t care that his lodge was literally right in the middle of the danger zone for any potential volcano blast, and he would rather be blasted to pieces by a volcano than leave his home just to see it destroyed.  As a result, he became a folk hero in the area.  Poems and songs were written about him, and he received numerous fan letters, including marriage proposals (possibly from people hoping to get added to his will at the last minute, let’s be real here). 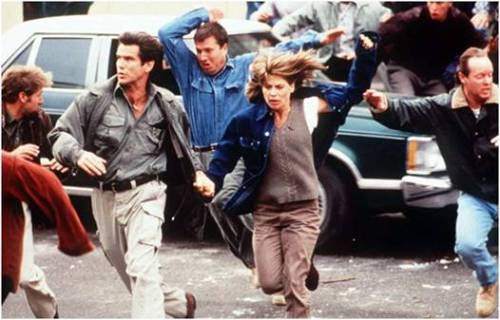 Oh right, this is the scene where they’re all like, “GET IN THE CHOPPA!” right?  No?  Fucking hell, what HAPPENED in this movie?

The rest is sadly predictable.  On May 18th, 1980, an earthquake caused the north face of Mount St. Helens to slide away, resulting in a massive explosion that sent tons of lava and pulverized rock towards Spirit Lake.  Harry Randall Truman and his sixteen (sixteen) cats were presumed in the lodge when it was buried by 150 feet of volcanic landslide debris.  Truman Trail and Harry’s Ridge in the Mount St. Helens region are now named after him, so his name will always be connected to Spirit Lake, just as he wanted.  It was a fine tribute to a man with a stubborn determination to look nature square in the eyes and say, “Fuck you.”  And at the very least, we respect the man for sticking to his guns.