As a purveyor of American knowledge, as well as a site that uses an American flag in our banner, we try to keep things fairly non-controversial here.  You tend not to see open displays of bigotry (unless it’s against Russians, French, or those damn Scandinavians) because that simply is a very un-American way to live life.  Don’t get us wrong, we absolutely support blind judgment, but that blind judgment is best suited for people who act a certain way you don’t like.  So if you decide you aren’t going to drink alcohol, or aren’t going to eat meat, or want to “conserve the environment” we can tell you go to go hell with a lot of colorful invectives, and we’ll probably call you ugly for good measure.

And normally, these groups can exist peacefully, because we are about as concerned about the views of these groups as we are about the cold sores our college exes have been getting since spring break.  Which is to say, we don’t care, it’s not our problem.  Unfortunately, while the STDs contracted by your former significant others tends not to be covered on the news (unless your ex was John Mayer, in which case, hi Jen and Jessica, we’re glad you found our site!) sometimes certain groups get covered in the news because they managed to Troll the national media into thinking that the American Public wants to see a balding white man talk about how evil Muslims are.  And that’s where we come in.

Seriously, dude looks like Gerald Ford after a botched lobotomy.

So with that in mind, we here at AFFotD feel compelled to take David Caton, executive director of the Florida Family Association down a few pegs.  You might remember them as that group that protested a TV show about Muslims living in America because it didn’t show the Muslim-Americans being terroristy.  Which is sort of like protesting the show In Living Color because it didn’t feature enough professional basketball players.  David Caton knows so little about other ethnicities and religions that he doesn’t drink juice because he thinks it’s going to kill Jesus and charge him interest.

So while we promised ourselves that we’d take a break from insulting ugly people, we decided that receding hairline jokes are acceptable when they’re about bigots.  So get your battle lances ready, America, it’s time for…

Pictured above:  David Caton imagining himself performing the physical act of love with another man.

At first glance, the FFA might seem like your typical radically non-centrist group run by the bigoted son of Peter Boyle who fell from a tree as a teenager and ain’t quite been right since.  And if you look into their home page, it sort of looks like a bigoted Rain Man who likes to send letters to advertising agencies.

Though of occasionally they’ll throw in pictures that don’t really “show the evils of the things they are fighting” as much as “oh yeah look at those hot chicks making out.”

Yes, it’s terrible and..uh..hot…uh…what were we talking about again?

At this point, we still are fairly unclear as to what the group, you know, stands for.  It appears they don’t like hot girl-on-girl action, or hot Muslim-on-Muslim action, or hot Mad Man wannabe TV shows.  But according to the “About us” section of the website, the “Florida Family Association is an organization that is made up of THOUSANDS OF SUPPORTERS across America.”  For reference’s sake, the capitalized words are like that on the site, and yes, given the fact that the rest of the “About us” page just describes the group’s executive director, David Caton, it sort of feels weirdly defensive.  Like when the kid who wears a helmet to school and spends his recesses in the corner eating worms tells you, “No, I totally have friends, I have a MILLION FRIENDS and they’re ALL ROBOCOP!”  David Caton totally was that kid, is what we’re trying to say.

Here’s a little hint, David- when you’re talking about how your group totally has a not-made-up amount of supporters, try not to make your “About us” segment look like you entered a McSweeney’s contest to write the most depressing autobiography ever.  Seriously, “David left a ten year accounting career as a corporate accounting controller in June of 1988 to become the executive…”apeagpiheaahpihagepohiag

Oh sorry, fell asleep on the keyboard there.  So David Caton spends half of his page meant to introduce his group to talk about how he totally used to be able to do some corporate taxes, and while we have nothing particularly against accountants, we have a hard time taking anyone seriously who spends most of their time trying to do, gulp, maths.

What we don’t understand is why Caton ignored the more fun parts of his autobiography, like how he wrote a book that chronicled his addiction to pornography (this is a card that people pull when they want to be called a sex addict but they’re not attractive enough to get people to sleep with them).

Either way, it’s not until we get deeper into the site for the FFA that we begin to see some of the craziness involved for this group that is basically run by one balding nutjob.  He lashes out against “secular progressives” which apparently is the group responsible for back taxes and the kind of sunburn where your skin peels after it heals.  While listing off the “terrifying” causes that secular progressives support, Caton goes from “Well, that’s misguided but sadly not uncommon from these kind of groups” to “…oh okay, he actually doesn’t know what things are.”

He goes from worrying that these evil groups support homosexuality (ye Gods!), to discussing the secular progressive’s love of “Explicitly immoral and openly blasphemous television shows” (It’s okay, we never liked Touched by an Angel either), “Pornography availability for everyone including youth” (…no, that last part is blatently false about every single group of anyone), and “Islamization of America including extreme degradation of women” because…wait, what?  It’s like a dyslexic went to the Bigotry store, took one look at the menu and said, “I’D LIKE THE HOUSE SAMPLER PLEASE!”

But seriously, speaking of degradation to women, David Caton is married.  Which means that on at least two occasions that poor woman has had to see what this man looks like while flopping on top of her like a fish in a smashed aquarium.

“Remember, if you want me to stop, the safety word is ‘oh that feels good.’”

Asking if David Caton has actually ever pleased a woman is like asking if baseballs are made out of pineapples  The answer is always, “No, of course not, what kind of question is that, did you just have a stroke, is that why you decided to string those random words together?”  If you showed him an anatomical model of the human vagina, and asked him to find the clitoris, he’d point to an unpublished medical report about late term abortions.  The last time David Caton has been able to reach climax was when he shook Pat Robertson’s hand.  Not that there’s anything wrong with that.  Pat Robertson has a very sensuous handshake.  But it does sort of take some of the teeth out of his virulently anti-gay stances.

Of course, we’re not here to talk about the FFA’s hatred of gay groups (but seriously you guys, lay off the Gays- not only are they American, they’re the main reason why we’re not woefully behind the Europeans as far as fashion trends go) other than to say, really, David Caton?  It’s two thousand fucking eleven.

Of course it’s the FFA’s stance against Muslims that is most compounding.  Now listen, as you know, we talk about religion about as much as we talk about our views on Cyndi Lauper.  No matter what we say, we know we’re going to piss some people off, so we’d rather keep our mouths shut than face the backlash.

Listen we’re not saying she’s bad we’re just saying we’re surprised she got as popular as she did, okay?

But there is a difference between disagreeing with the fundamental tenants of a religion and with thinking that a religion is defined by it’s crazy people.  Just like we don’t compare all Protestants to the Ku Klux Klan, we don’t compare the majority of Muslims to terrorists.  That’s generally considered, among polite company, to be “impolite,” “ignorant” and “an indicator that someone is suffering from a severe brain tumor.”

That said, no one is particularly rushing to get David Caton’s tumor looked at, because they’re letting him pull shit like this.

So apparently there is a show called Campbell’s Hershey’s Chocolate World All-American Muslim.  Why does David Caton have a problem with this show?  It’s not that the series shows Muslims plotting against American or preaching anti-American values (which hey, we’d be totally against too, don’t fuck with America) that Caton has a problem with.  His issue is that the show shows Muslims, gasp, acting like normal Americans, totally glossing over the fact that there are Muslims out there that hate America and are, uh, wife beating terrorists?  So, it…uh…lulls us into a false sense of…you know, don’t ask us to try to explain the reasoning behind this other than saying, “David Caton expects all Muslims to be extremist fanatics, and is mad that his stereotype of people who practice the Muslim faith is not being confirmed in this TV show.”

David Caton strikes us as the kind of person who would protest a sunscreen commercial because it does not accurately portray what would happen if you actually stood on the surface of the sun, if there was a way to make that analogy, and make it racist.

When David Caton watches the Harold and Kumar films (which he wouldn’t, because they have nudity and brown people) his first complaint would be that none of the characters work in a call center or know Kung Fu. 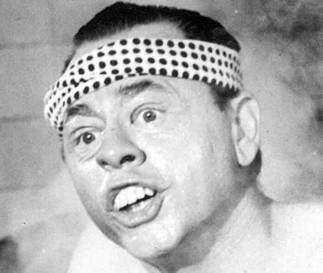 “Finally, an Asian character that meets my expectations.”  ~David Caton

Ultimately, there’s really no reason to talk about David Caton, who is a tiny man with a remedial knowledge of HTML and who totally missed the message of all those “We are the World” commercials.  What we do need, however, is for news stories to stop giving this the light of day, because that’s the only way that David Caton can feel that his life has any significance (and to be fair, that sense only lasts a few seconds for him).

Of course we don’t count, because unlike most news outlets, we have no problem saying that David Caton is (probably) impotent.*

*for legal reasons we at AFFotD cannot confirm nor deny the veracity of any statements regarding David Caton’s sexual performance, prowess, or preferences, and though the content of this article should be viewed as satirical, we will say this.  Come at us, bro.  Come at us.