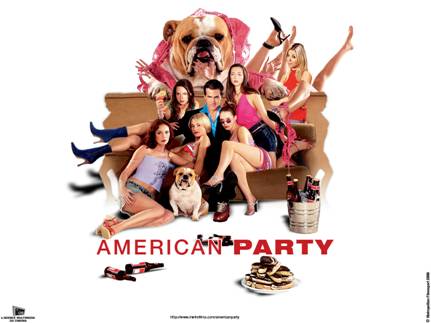 It is with this in mind that we have to bring your attention to yet another site that is trying to besmirch America with their “articles.”  You know what this means, it’s time for us to take a massive shit on someone else’s writing.

Today’s recipient of our ire is the website “HowStuffWorks” for their egregious slideshow (eww, slideshow?) about “10 Strange American Traditions.”  Umm, asshats, is being awesome strange, because that’s the only way we can make heads or tails out of your article’s title.  These 10 American activities have been chosen because the writers here think that other nations would find them “strange at best.”  Which means that they totally named this article the wrong thing.  It should be called “10 American Traditions That Prove That Every Other Country Is Doing It Wrong.” 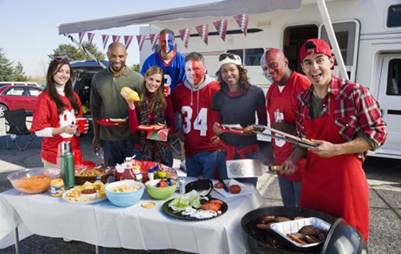 When you, as an American, look at this picture, you no doubt think a combination of A- “Look at this happy, multicultural group of friends enjoying a tailgate” B- “Holy hell, that trailer’s got an overhang, that’s awesome!” and C- “They need to synchronize their face paint better, that dude in the blue is ruining everything.”  When Jessika Toothman (…really?  Toothman?  Uh, okay), the writer of this article, sees this picture she thinks, “This looks enjoyable, yet is far too complicated for foreign eyes to understand.  I should help teach them what a Tailgate is.”

Honestly, we can’t find what anyone could find “strange” about this.  In the ensuing description of tailgating that seems to leave out booze because Toothman is a Morman name apparently, “Tailgaters…crowd the stadium’s parking lot, grilling food, sipping cold adult beverages, playing lawn games and tossing around footballs.”  With a hint of incredulity, the article points out, “Some are out there at the crack of dawn to begin the festivities—or even the night before to claim a spot!”  We have no idea what kind of person would hear that description and see anything out of the ordinary.  Calling an event centered around day drinking “strange” is like complaining about the airbrushing job done on a Playboy pictorial.  It’s an American Tradition, and it’s aesthetically pleasing, so why even bother speaking about it negatively?

If a member of a foreign country ever said, “So wait, you spend the time before a sporting event time hanging out with likeminded individuals, eating unhealthy grilled foods, and getting drunk with each other, occasionally while playing recreational games like beanbags?  That sounds strange to me!” they immediately would be kicked out of NATO.  This is some public policy shit here.  Watch it Toothman, you keep it up and we’ll start making fun of the fact that your parents didn’t know how to spell “Jessica.”

The Super Bowl is a singularly important American event, lending itself to be the most watched event in American Television history (take that, M*A*S*H*, you old hippies) while also costing American business hundreds of millions of dollars in hangover-related dips in productivity.  And part of the reason why the Super Bowl works so well is that it embraces everything that America finds important.  Head injuries Football.  Excessive alcohol consumption.  Unhealthy foods.  And, of course, rampant mutated consumerism.

Yes, the if the popularity of Super Bowl Commercials don’t make sense to you, try talking to someone who doesn’t “like football.”  After you’ve ensured that they’re not some sort of Communist agent by feeding them four shots of whiskey, they will tell you that they still watch the Super Bowl.  Why?  For the commercials.  Because when you have 100 million people watching an event, the commercials are going to be expensive, and if the commercials are going to be expensive, they’re going to try (and often fail) to have the same quality as a short film.  So yes, if you’re at a party, or a bar, you’re going to be interested in seeing what that’s all about.  It’s not a “particular tradition” Jessika, it’s something that just makes sense.

Really, Tooth Man?  Celebrating the American Dream is weird to you?  What kind of dreamless, depressing country are you writing this article for that you’d assume your readership would find the American Dream to be “strange”?  You realize that  Yugoslavia isn’t a country anymore, right?  Because it’s not.

7:  Holding “Trials of the Century”

We’re not saying that we don’t love “Trials of the Century” (we absolutely do) but we are saying that we incredibly disagree with this viewpoint.  Jessika, ugh, Toothman, UGH, says that America loves sensationalism (which we do) and often have trials that make celebrities (yup).  That’s all fair, but do we consider “trials of the century” to be intrinsically American?  Is that really one of our “traditions”?  We wrote a fun fact about how much we like frivolous law suits and even we were hesitant to call those overly American.

But here’s the thing to…remember Amanda Knox?  Remember how apeshit Europe went about that trial?  Yeah, that was a foreign nation doing a “trial of the century” so don’t even try to pawn this one off as a “Peculiar American Tradition.”  Boom.  We just out-researched the living hell out of you, Tooth Man, and we’re halfway through a bottle of absinthe.

Dear Jezzeekah Tooth man.  Thank you for giving us an idea for a future fun fact.  No, we mean it, we hadn’t even though about writing an article discussing the act of launching pumpkins hundreds of feet using catapults, trebuchets, and cannons, but now we can’t think of anything else.  That’s amazing, and we can actually see why other countries would consider it “strange,” though we’d have to assume they also would realize how incredibly badass that sounds.  There’s only one problem…

How can you call this an American Tradition when it’s been popular for less than 10 years, and when Europe has their own competition for it too?  Get that shit out of our face!  This is not an article for “Cool things Americans do” you wrote this expressly as an article of “American Traditions that other people find to be strange.”  Did you know some Americans like to put open bucks of paint on top of their semi trucks and do donuts in parking lots?  Well, some probably do, and yes, it sounds awesome, but that doesn’t make it an American tradition.  Especially if they’re driving a Japanese car.

The concept of this entire article is so mind-boggling to us that we can’t even concentrate anymore today.  We’ll be back tomorrow to go through the last five “weird” American “traditions” on this list, and show you more reasons why, though we don’t actively dislike her, we are very disappointed in Jessika Tooth Man.  For shame, ‘Sika.  For shame.

This entry was posted in The Rest of Them and tagged America, American Dream, Chicago. Bookmark the permalink.