“YES I AM AWARE HOW SIMILAR THIS IS TO THE STANDOFF SCENE IN RESEVOIR DOGS I DO NOT CARE I AM GETTING THAT LAST DRUMSTICK.” 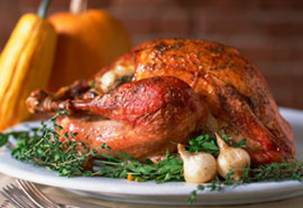 Thanksgiving is a beautiful lie told to American families to give them an excuse to watch football as they drink enough to get into yelling arguments with their family while they eat enough Turkey knock you out mid-fight.  Thanksgiving was invented as a way for families to work out their issues before “group therapy” became a thing, and if you’re still clinging to the myth of the first Thanksgiving being an idealistic sharing of cultures, we’ve got some bad news for you.  But that shouldn’t come as too much of a shock to you- it’s just like Santa Claus, a nice myth to help you get in the Holiday spirit.

Yes Thanksgiving is a wonderous American occasion, and if you’re reading this right now, we have one question for you.  What are you doing, you fools, you should be drunk by now!  If you’re saying, “But AFFotD, I am drunk” we’d retort that if we could clearly comprehend the sentence you just uttered, so you’re nowhere close to Thankgiving drunk.

Yes, we’ll let you know some interesting facts about Thanksgiving, we guess.  But only if it’s combined with spiced cider and enough Thanksgiving food to give John Wayne a Coronary.

Thanksgiving is a fancy way to describe a harvest festival, which many countries have been doing since the times when our ability to survive as a species depended on how fast seeds grew after we stuck them in mounds of dirt and animal poop.  And while Canada has their own misguided attempt at copying our Thanksgiving (October, you guys?  Honestly?) America is the only one that does it right.

While some aspects of the myth of the “First Thanksgiving” are true (Native Americans and Pilgrims sharing food for a harvest feast in 1621) there are still lovely instances of Pigrim/Native Americans murdering the shit out of each other (like the Indian Massacre of 1622).  So while focusing on the “origin” for where Thanksgiving as a concept comes from can gives us opportunity to remind ourselves that in the past, everyone was just awful, it’s pretty pointless in the discussion of the holiday that is now known as the best reason to combine yams with marshmallows.  So let’s delve into Thanksgiving’s history from when it really started.

When Abraham Lincoln decided to taunt the south.

Yes, Lincoln decided to have a day to celebrate harvests while in the middle of a war that was busy shutting down (or at the very least, disrupting) the agriculture that drove the economy of the South.  If that wasn’t a backhanded “fuck you” to General Lee, we defy you to find a more realistic explaination.

Of course the nation didn’t stay divided, and now the South too can appreciate all the best things that Thanksgiving has to offer (primarily, you know, booze, football, and comfort food) so in a sense, everyone was a winner.  Now, Thanksgiving requires (requires) the following aspects to make it proper and right.

Yes, comfort food is required.  Every family has their own unique take on what to eat at their Thanksgiving table, but you can safely bet that Turkey, mashed potatoes, gravy, stuffing and cranberry sauce will be there on the table.  And by “safely bet” we mean to say “if you show up to a Thanksgiving dinner without these things, you are legally allowed to burn the host’s house to the ground.”  Seriously, if you went to Thanksgiving Dinner and they said “oh we decided against making mashed potatoes this year, we made cous cous instead” the small gland that controls your American secretions would start convulsing and you’d black out for three days only to wake up naked in a Wal-Mart freezer section holding onto the severed head of a 12 point buck.  Not that we’re talking from personal experience.

Apart from these basic staples, you have a whole slew of foods that are optional-but-recommended.  Sweet corn, Sweet potatoes (with marshmallows preferably), string bean casserole, and pumpkin pie should honestly be on your table, but you wouldn’t commit any crime sprees if you had to go through a Thanksgiving with out it.

There of course will be other dishes at your Thanksgiving, no doubt your family has some special traditional recipe that they eat every holiday season.  The more food the better, as far as Thanksgiving goes (for those of you ladies currently “dieting” we should inform you that the Surgeon General promises that all calories you consume on Thanksgiving don’t count!) just so long as those foods are grossly unhealthy.  That’s the important thing here.  Be unhealthy as possible on Thanksgiving.  That includes.

Yes, booze is to Thanksgiving as booze is to every analogy we at AFFotD use that starts with the words “___ is to booze as ___ is to ____.”  By which we mean to say, it’s a pretty big fucking deal.  Thanksgiving revolves around the three Fs.  Food, Football, and getting Fucked up.  True story- teetotalers are not legally allowed to host Thanksgiving dinners.  An empty liquor cabinet on Thanksgiving is almost as bad as, we don’t know, eating Tofurkey.  Oh that reminds us.

To be perfectly honest, there’s only so many times you can do this before everyone else gets the hint.  If we can rid the world of this foul menace, we think we’ve made America a better place.

Of course there are other important things like napping, and football, and, uh family we guess.  But, cards on the table, we’re fairly…gone right now.  And you should be too!  Happy Thanksgiving!

This entry was posted in Miscellaneous America. Bookmark the permalink.

One response to “Happy Thanksgiving, From AFFotD (Now with 100% more: FACTS)”