As Americans, we’re better than most people at just about everything, though Japan has us edged out in the “being weird” categories.  For the longest time, Japan took their “being weird” expertise and used them to perfect the art of the Vending Machine.  While Americans use vending machines for their fatty snacks, sugary drinks, and cancery-y cigarettes, Japan took one look at the concept and thought to themselves, “panties.”

But, in our own small way, we may have finally caught up to the Japanese in the vending machine field.  You could even say we’ve outdone them.  It’s all part of this month’s… 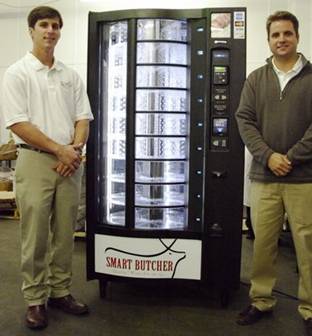 Birmingham, Alabama happens to be the home of the above listed beautiful and insane idea—the Smart Butcher provides fresh, delicious meat without any pesky “people” needing to be involved.  This machine is ideal for the American out there who screams, “Well, I love meat, and fear human contact, why won’t the voices ever stop!”

It also ensures that there are fewer obstacles in your ability to occure a filet mignon, which we wholeheartedly endorse.

Rob Harrison came up with this idea, and while many of us would stop there and say, “Woah, that’s the last time I mix absinthe with peyote” he decided to run with it.  And he happened to have a friend in Chase Evans, who apart from sounding like he should be a Quarterback for the Dillon Panthers, also happened to have family in the meat wholesale business.  That’s when they started looking into vending machine technology to make the Smart Butcher, a refrigerated vending machine that would store and dispense delicious, fresh meat. 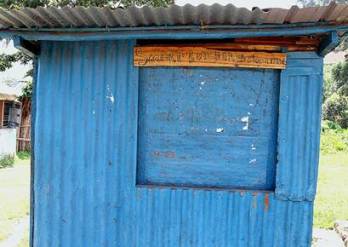 They went through several prototypes

While the vending machines are planned for areas where access to fresh meat from a butcher or a grocery store would be more difficult to come by, we have to say that their prices seem pretty good.  You can put in $1 and $5 bills, or just swipe your credit card, to get $2.49 pork steaks, $3,99 8-ounce sirloin steaks, and $5.99 12-ounce ribeye steaks.

The machine also sells sausages and other meats, but at this point the only thing that surprises you about it is that the vending machine doesn’t just have animals in there to hack meat from for your convenience.  We can only assume that will be five years away.

The initial investment for this idea was only $10,000, which should shame every American who has bought a new car without even thinking of using that money to make a meat vending machine.  Honestly, for shame.

Logistically, we don’t want to think about things like that one time we bought a bag of Doritos and had seen that it had expired several months before, and thought to ourselves, “Jesus Christ, don’t chips have like a three year shelf life?”  What, you’re thinking about that now, too?  Shh, shh, they’ll, uh, replace the steaks somehow, we don’t know vending machine science, just forget we said anything.

While Harrison and Evans say they’re still looking for the proper niche for the vending machine to really “take off” we think they’ve already found it.

This entry was posted in Strange Foods and tagged America, News It, Smart Butcher, steak, Vending Machine. Bookmark the permalink.