“Casseroles, barbecues, and blind bigotry, that’s what I’m all about!” 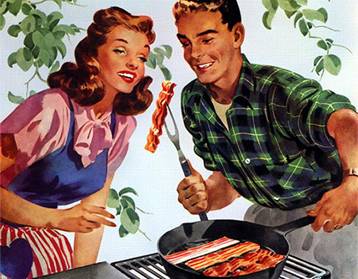 “I like bacon.  I find pork in general to be unthreatening because, like me, it is white and can’t be eaten by the Jews.”

America Fun Fact of the Day likes to talk about food.  A lot.  And sometimes we have Wendy’s sponsor it.  We hype food, and fatty foods in particular, so much that many of you privately wonder if we have a vested interest in the success of the Rascal Scooter company.  That’s because eating is a truly American pastime, and eating ridiculously has been around as long as heart attacks.

There’s only one AFFotD staff member who was part of our team back in the 1950’s when we were a somewhat bigoted bi-weekly publication called “The Informative American.”  He’s in his late 80’s now, and we basically keep him around out of deference to the old guard, since he doesn’t do much other than demand that we come up with more offensive slurs for Mexicans.  However, he did inform us that food has always been as gloriously unhealthy, even back in the 1950’s.  He then added something about not liking it when Puerto Ricans touch his food, but we had been tuning him out at that point.

Sure enough, digging through our backlog of The Informative American pamphlets, we did find an interesting time in American culinary history, where mashing all the foods you could think of together was called a “wholesome family meal” and when there were videos made telling “little Billy” that he’ll get a tummy ache if he eats his bacon too quickly.  It truly was a fascinating time in America culinary history, without any of those pesky “gourmet ingredients that are fancier than Velveeta” or “any knowledge of the existence of soy products.”  So in honor of these simpler times, we present to you, unedited from its original form…

Greetings, dining Americans!  1954 truly has been a whirlwind year for our plentiful stomachs, with the C.A. Swanson & Sons “TV Brand Frozen Dinner” continuing its climb into the marketplace, as well as with the knowledge that we remain years ahead of the damn Russians in the butter stockpile war.  Great job, farmers of the Midwest!  And while our American bellies become distended and bloated with the fine cooking of our doting wives, let’s take a moment here to give you, the helpful American, tips on how to eat best so that you can expel the Chinaman whenever he develops the audacity to invade us from our Westward coasts.

Because if your wife isn’t cooking for you, she might begin developing a social identity outside of her dependence on you, and you wouldn’t want that would you?

If we needed to know how to spell, we wouldn’t have secretarial academies for to send our promiscuous daughters.  That being said, a Casserole is a dietary staple of the 1954 American.  Why bother with “fresh” items like vegetables when all the greatest American foods come in cans that can be put in a large container and baked for your pleasure?  We’ve never seen a mushroom, but we can only assume it tastes like the can of Campbell’s Cream of Mushroom that the Mrs. puts in her green bean casserole.  It’s the only way an American can be tricked into eating vegetables.

A Casserole is strange and mysterious, and from what our exhaustive research has gathered, the secrets of Casserole creation are genetic and appear only in women at some point while going through puberty after they spend time in the kitchen with their mother for some reason.  All we know is that if you find a big enough dish to bake it in, you end up with a giant combination of canned foods that you don’t have to taste because you’re already six vodka and waters into the evening.

Your wife is supposed to cook all day while you work, anxiously awaiting your arrival home from a long day at the office with whatever passive sexually act she sees most appropriate for the situation.  But what does this mean for the weekends?  You’re the provider, and nothing arouses you more than the bare torso of the pool boy and the sound of meat sizzling on grill.  That’s why the new advances in grilling technology can help you grill meat outside while training your youngest son how to pour you a proper Tom Collins while your wife’s trembling hands nurse a stiff glass of gin as she struggles to chop up vegetables for that salad you’re only going to make her throw away anyhow.

Nothing makes you feel like a red-blooded American male like taking off your shirt, pouring an obscene amount of accelerant on some hot coals, and searing up a few hamburgers while chain smoking away the afternoon.  If you play your cards right you might even catch the eye of the mysterious divorcee who just moved in next door.  We see the way you look at us, you minx.

While America has only recently harnessed the ability to mass produce these white, puffy beacons of freedom.  But lord have we figured out how to use them to make our lives glorious and unhealthy, full of all the teeth-rattling sugar a future diabetic can dream of.  When faced with “boring” conventional cereals, such as Rice Krispies, marshmallows make them an obscenely unhealthy dessert item!  That’ll teach the Ruskie’s to try to conquer space!  Marshmallows!

Also, it’s a handy substitute for lettuce in salad.

The new advent of the TV Dinner is both revolutionary and terrifying.  On one hand, it is a fully functional meal that does not require any preparation from our wives, who already inundate our recycling bins with scores of hidden empty bottles of wine.  However, it does not totally make your American wives obsolete, because it must still be cooked in a conventional oven.  The instructions say “at 425 for 25 minutes” which is pure gibberish and numbers.  But conceivably, some day?  A man may learn the mysteries behind the oven, which could dangerously shift the American dynamic for the worst.  Of course this is foolish.  Man will never dare touch an oven, unless they want to be cursed with ovaries.  This is all the latest science, that we all know.

This entry was posted in The Informative American. Bookmark the permalink.