Alvin C. York: The Rambo of World War I 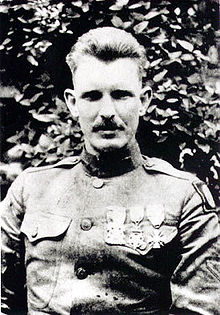 If there’s one thing to learn from the respective budgets and box office grosses of Terminator compared to Terminator 2: Judgment Day, it’s that sometimes the sequel is going to get more press than the original.  Such was the case with the World Wars.  While World War I was a massively horrific war, with over 15 million deaths, it tends to get overshadowed by World War II (which killed off 2.5% of the freaking world’s population).  So when we hear war stories, there tends to be a focus on the “Teddy Roosevelt’s son storming Normandy” and less on the “holy shit there were battles in World War I with nearly two million casualties” side of things.

But while World War II made for more daring tales of American badassery, we wouldn’t be doing our nation’s history justice without mentioning one of the arguably most famous American veterans of World War I.  That would be Alvin C. York, the former (boo) alcoholic (yay!) Sergeant who ended up being one of the most decorated American soldiers in the whole war.  Because while he considered himself a man of peace, as you can clearly tell, his moustache alone could clear an enemy machine gun nest.

That’s why we’re here to salute…

Boom.  Ladies, if you just stared into the eyes of this picture, you are now six months pregnant.

Alvin York was born in Pall Mall, Tennessee on December 13, 1887, the third oldest of eleven children from a woman who would later go on to be known as, “Tired…just…so tired.”  York grew up in a family that supported themselves largely through subsistence farming and hunting, allowing York to become a good shot with a rifle at a young age.  As York honed his sharpshooting, his father could be seen in the distance, nodding darkly, mumbling something about “foreshadowing.”  This in itself was foreshadowing, as York’s father, William York, died in 1911, leaving Alvin to help his mother raising his younger siblings.

York began working as a skilled laborer, but was what some politely refer to as a “violent alcoholic” who liked to get into bar fights because this is America, dammit.  A religious man, York eventually spurned the bottle (boo) and violence (BOO) and joined a church (*crickets*) that preached pacifism (eww).

This of course led to York being drafted into the military because, despite being a 29-year old pacifist who wrote “Don’t want to fight” on his draft form, he also had the marksmanship and gloriously American moustache of a born killer (of Germans).

Not to harp on the issue too much, but hot damn that’s a glorious moustache…

The United States military dismissed his initial claim for conscientious objector status because, ha, it was 1917, if you weren’t drafted to be a human bumper tied to the front of an experimental tank, you should consider yourself lucky.  During the course of his training, he was convinced by his battalion commander (a fellow Bible student) that the Bible totally said it was okay to kill bad guys.  Not wanting to half-ass things, he decided he might as well be awesome at killing the enemy.

York’s moment in the sun occurred during the Meuse-Argonne Offensive in France.  Seventeen troops, including the at-the-time non-commissioned Corporal York, snuck behind the German lines in order to try to take out machine guns.  After a brief firefight, a fairly large force of German soldiers surrendered to the Americans (historians can only speculate the roll that York’s moustache had to play in this surrender).  As York and his fellow officers, which was under the command of Sergeant Bernard Early,  were dealing with prisoners, the German machine guns turned around and shot up the group, killing six and wounding three others, including Sergeant Early.  This put York in charge of the remaining seven soldiers, who remained under cover while guarding their prisoners.

There were 32 machine guns firing on the troops, which York dealt with like any self-respecting American pacifist—he started picking off the German’s operating the machine guns like he was using a goddamn water pistol to fill a balloon in a carnival game.

In York’s own words, “I was sharp shooting…All the time I kept yelling at them to come down.  I didn’t want to kill any more than I had to.  But it was they or I.  And I was giving them the best I had.” 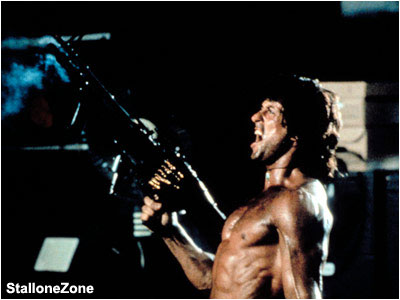 Because sniping off Germans behind machine guns isn’t badass enough, six German soldiers in a nearby trench charged York with bayonets affixed, forgetting the old adage of “don’t bring bayonets to a gun fight in the middle of World War I against Alvin C. York” decided to charge York,  who promptly killed all six of the Germans dead to the point that historians would later go on to describe them as, “Just, like, so dead you guys.”  Of course, it wasn’t so easy—since Alvin York’s experience in WWI was essentially a war movie, he had run out of ammo with his rifle, and had to take out his .45 Cold pistol and shoot his attackers before he could even say “The Die Hard franchise should pay my family royalties for stealing from my life story.”

At this point, a German First Lieutenant named Paul Vollmer, who commanded the Battalion, emptied his pistol trying to kill the raging pacifist, but he failed to realize that, like many true Americans, Alvin York was immune to bullets (but not to poor dietary habits).  When he ran out of bullets, Vollmer surrendered to York’s men.

At the end of the attack, which York would win the Medal of Honor for, 28 Germans lay dead, 132 were captured, and 32 machine guns had been captured.  York won numerous awards for his actions, and ended up becoming one of the most successful American war heroes of World War I.  He often turned down chances to cash in on his fame, though eventually a movie about his life was made in 1940 (Sergeant York, starring Gary Cooper as York, was the top grossing film of the year, and was nominated for 11 Academy Awards).  While still claiming to be a pacifist, he tried to enlist in World War II, getting turned down from active service because of his age (he was well into his 50’s) and his health (having already killed enough men to be considered a good crowd at a High Schooler’s rock concert, he decided “fuck eating healthy food” and weighed 250 pounds by 1945) he instead was given an honorary rank of Colonel in the Army Signal Corps, where he participated in bond drives and made appearances in support of the war effort.

While York spent the rest of his life no longer killing Germans, he managed to cling to his American roots, vocally supporting the use of Nukes against Russia ( wooo!) and naming many of his eight children (damn son!) after American figures (Take a bow, Woodrow Wilson York, Sam Houston York, Andrew Jackson York, Betsy Ross York, and Thomas Jefferson York).

Despite having health problems for a good 40 years, he lived to reach the respectable age of 1976, and stayed in Tennessee till the very end.  He left behind a large, happy family, and a legacy that can never be taken away from him.  After all, we can’t think of many sharp shooting pacifists with a total of 9 months of schooling to their name that can end up becoming a stamp for being so good at killing Germans. 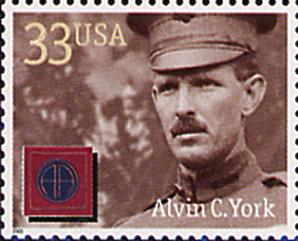 Though we suspect the moustache helped, just a little.

This entry was posted in Fighters and tagged Alvin C. York, America, Germans, Medal of Honor, Moustache, World War I. Bookmark the permalink.