AFFotD News Item of the Month: The Huffington Post Can Be Quite…PUNNY When Talking About a…HOT DOG of a Tale in the WURST Way and Oh God Just Kill Us Now, It’s A Fucking Story About The World’s Largest Bratwurst Okay? Not a Fucking Convention For Marx Brothers Enthusiasts. GodDAMNit. 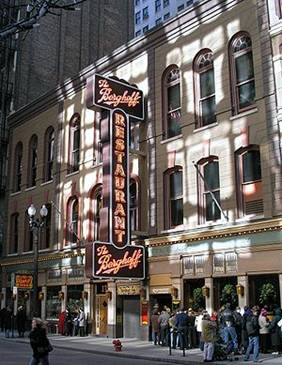 Giant penis.  There, glad to get that out of our system.  AFFotD has made it an occasional habit to bring you moderately new “news” stories, if for no other reason than to save you from the terror of reading about something in a newspaper.  So whenever we’re talking about Brewmasters peeing in glasses or people drinking only beer for lent, we’re there…well, a few days later.

So when we see something about a Chicago restaurant setting a world record by making a 47-foot long bratwurst, you can count on us to fill you in, without making you wade through the treacherous sea of awful, cringe-worthy puns that certain articles by the goddamn Huffington Post about it choose to use.

Seriously, there’s more bad puns in the Huffington Post article about this sausage than a clown funeral.  Do clowns even use puns?  Would they say puns at a clown funeral?  We don’t know.  Stop bothering us.  Sausage is another way to describe a penis. 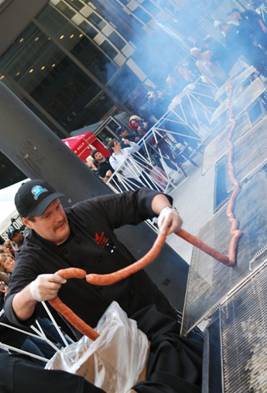 The Berghoff Restaurant, a German restaurant in Chicago, decided they like their Oktoberfests like they like their coffee.  Just teeming with large phallic imagery.  Like, 47 feet of three-inch wide sausage.  So that’s what they did.  Forty pounds of meat were used, and the casing came from the intestines of one pig (apparently named “Chic” because people in urban areas have no idea how to name pigs).  The bun was fifty feet long and required 35 pounds of dough.  The bratwurst itself was placed on 8 different grills and took 30 minutes to get cooked all the way through.

The sausage was cut up and sold in pieces to eventually raise $1,000 for a very worthy charity (Mercy Home for Boys and Girls), and it also helped Huffington Post set a world record for most sausage puns in an article (“they never sausage a huge brat”?  Really?  You realize every time you make a pun that cringe worthy a trained medical professional is forced to punch a kitten, right?  Every damn time.  It’s called the Hippocratic oath, look it up).

In the course of trying to find a less abrasively-pun-tastic take on this gloriously American achievement, we discovered that real “bratwurst” are tougher to make incredibly long, because of that whole single-casing thing.  That’s because Germany decided to prove how much cooler America is by bastardizing their attempt to set a world record in the high-profile “sausage” category.  Yes, a year ago, Germany made a three hundred foot Bratwurst…

But, it was entirely vegetarian. 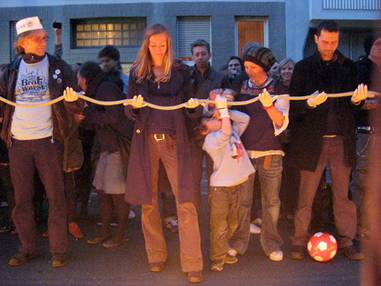 Also, it sort of looked like a bunch of zombie’s disemboweling a victim.

That was enough to make us literally blackout with rage.  When we came to, we had some German minister in a headlock.  We kept showing him pictures of the 47-foot real bratwurst that America made and he just started crying.  “Look at it!  Look at it” we kept screaming.  He said something in some gibberish language in response.

The only thing that tapered our rage was the discovery of an article that thankfully was devoid of awful puns further describing The Berghoff’s bratwurst as the largest “Midwestern sausage.”  The largest actual sausage was 36 miles.  But it wasn’t a bratwurst, so fuck you England.  Also, “world’s largest sausage” can lead to some interesting google results, so consider yourself warned if you choose to research this yourself.

But ultimately, it doesn’t matter the size of anyone else’s sausage (heh) as long as it’s wholesome (…eh?), strong (yup), beefy (had to) and something something genitals.  So here’s to you, Berghoff, for setting such an American record.  And shame on you, hacks at Huffington Post.  You may be our parent company, but that doesn’t give you license to drop puns like a Copywriter suffering from Alzheimer’s.   For shame.  For shame.

This entry was posted in America's Largest Everything, Hot Dogs, Hamburgers, Steaks. Bookmark the permalink.