~One of Four Check Boxes on Medical Forms Under “Reason For Heart Attack.”

Ranch dressing claims to be one of the, if not the only, truly American salad dressing. We do not dispute this. No, seriously, we’ve written to that effect and everything. Hidden Valley, a ranch in California, originally invented the creamy gluttonous delicacy in the 50s before selling the brand to Clorox for $8 million in 1972. You’d think that Ranch sells itself, but the folks behind Hidden Valley apparently disagree. Today, Hidden Valley Ranch sells about half a billion dollars’ worth of product a year, but in order to keep things fresh, they’ve been rolling out some, oh, let’s say “interesting” marketing gimmicks. You’ve probably heard about some of them. But not all. So we compiled the rest of them here for you. Because we don’t know about you, but when we think of Ranch dressing, we definitely think “gold, gem-encrusted bottle.” Or we do now, apparently.

Over the holidays season, Hidden Valley provided some gifts for the “Ranch lover in your family” which is a redundant phrase. People who don’t love Ranch dressing aren’t allowed to have a family. We all know this. Anyway, one of the items available was a Hidden Valley Ranch bottle…in earring form. And because, sure, whatever, it was part of a mis-matched set that included a slice of pizza earring.

And, this being America, those fuckers sold out almost immediately. We don’t really blame America for that, our staffers with pierced ears would totally buy those, and our staffers without pierced ears would totally buy that while grabbing a clothes pin, a lighter, and an ice cube to go all Parent Trap on that shit.  But that wasn’t the only item you could buy as part of this gimmick.

This also sold out, which leads us to wonder how many people are out there with Ranch dressing ugly sweaters, and also where are there, would they be up to hang out, they seem cool. There’s not much to add about this sweater, which makes sense as an ugly sweater the exact same way a frog-themed ugly sweater makes sense—it doesn’t, but it’s still awesome. Unfortunately, not all of the items Ranch went with were quite so enjoyable.

The Song Remake So Bad They Removed It

Last year, during National Ranch Dressing Day (it’s 2018, if you’re still shocked that some random intimate object has its own day, well, welcome to your first day on the Internet, young sir or madam) Hidden Valley decided to go all out, launching the Hidden Valley Ranch Outlet responsible for the Ranch earrings and the Ranch sweater. But that’s not all they did.

They also decided to take the song Da Dip, and remake it as a song about Ranch dressing. If that sounds like the whitest thing you’ve ever heard, it apparently was! That screenshot there is literally the only evidence of the video, since the good folks at Clorox took that shit down with lightning speed and scrubbed the internet of just about any mention of its existence.

As you can see, before it was taken down it had a hefty 50% thumbs up/thumbs down ratio after just 2,000 views. So, um, yeah. To all you brands out there reading this, never try to make a song parody about your product. It will always induce cringes. 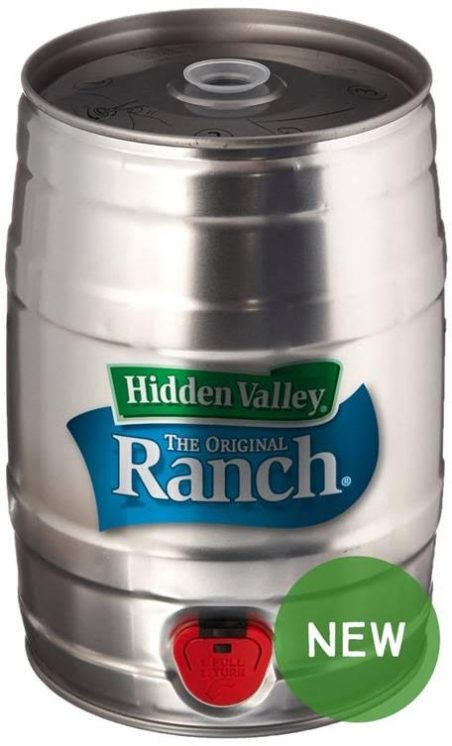 We’ve already covered this extensively, but no list would be complete without mention of that time last year that Hidden Valley lost their damn minds and decided to sell a keg of Ranch dressing. It sold out immediately, but good news—as of the writing of this article, it’s back for sale, for just $50. It was the best idea they’ve ever had. Though the next item could give it a run for its money… 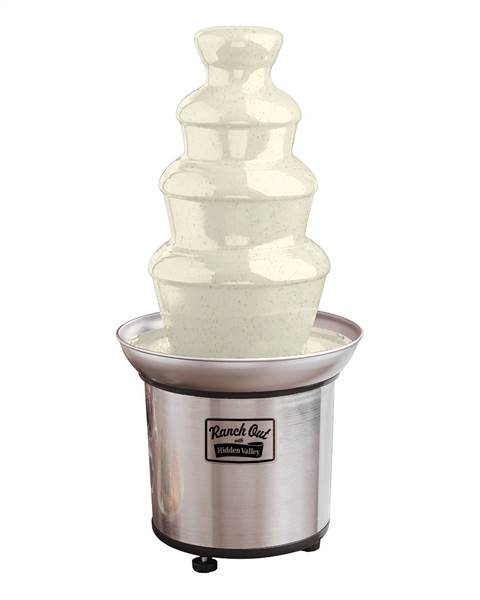 Listen, we know, we know, having a Ranch fountain at your wedding is very white trash. However, and hear us out on this…what if we don’t care and we want to see a Ranch fountain at every wedding? It originally sold for $100, coming with 10 bottles-worth of dressing, but now it is sold, sadly, Ranch-less. That said, it’s only $90 so it still could be worth a purchase if you really want to terrify your in-laws during the next holiday season.

But our final gimmick is by far the most gimmicky, and probably the least fun (other than that song). And that would be…

We have some questions. Yes, Hidden Valley made an 18-karat white gold, diamond-and-sapphire-encrusted bottle of Ranch dressing. No, the bottle was not for sale. No, it is not filled with Ranch. But if you were the person who won it in the Twitter contest that was launched in March of this year, then you can do whatever the hell you want with it. Does this make any sense? No. Is it awesome? Like, yes and no? We’re kind of on the fence about it to be honest.

We honestly don’t have a good explanation for why Hidden Valley has suddenly decided to launch all of the gimmicks (seriously, all of these came out within the past year), but we’re not exactly mad about it. But hey, we’re just saying, if they need help spreading the word of Ranch’s goodness…we’re right here, Hidden Valley. And we’ll do anything for a free Ranch fountain.