“There is nothing left but to get drunk.”

~Franklin Pierce, Remarking on the End of His Presidency (no, seriously, he actually said that) 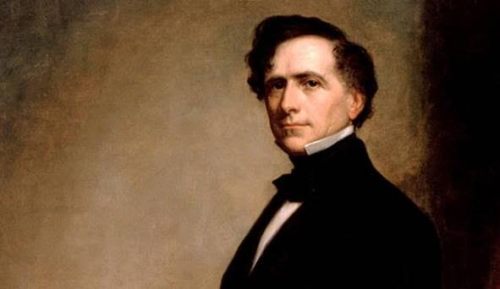 We’ve written three articles about America’s Drunkest Presidents, and this is the first time where we’re truly wandering into uncomfortable territory, since we’re about to tell you about a guy who totally died of liver disease due to his drinking. But our 14th President, Franklin Pierce, spent all 64 years of his life getting absolutely wrecked, and that definitely makes him one of our Drunkest Presidents, so let’s just not dwell on the human tragedy involved, and talk about booze.  Cool?  Okay, cool. 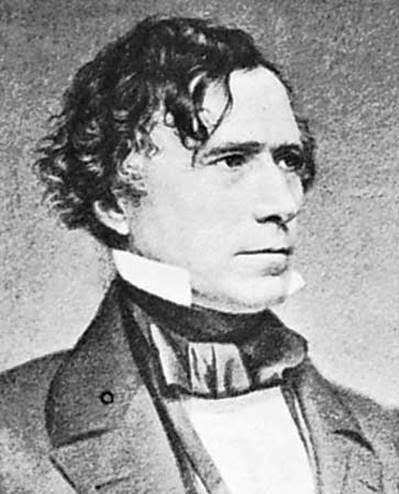 Why does he look exactly like Gary Oldman in The Fifth Element in this picture?

Franklin Pierce wasn’t a great president, just a crazy obscure and mediocre one. As in, he didn’t particularly do anything super bad (he had some, sigh, pro-slavery stuff under his docket, but that was pretty much it) or anything particularly good. He just kind of existed in a blind spot in American history (like, did anything actually happen in the 1850s?) and had a super sad personal life (his wife very much did not want him running for President, all his kids died which drove his wife to depression, and, yeah, life was rough in the 19th century) and, well, he just drank a bunch. Like a bunch.

Actually, let’s go into his personal life for a bit, because it’s definitely some “hell, we’d be drinking too” shit.  Pierce was a lawyer and a politician, serving as the United States Attorney for New Hampshire in the 1840s before taking arms to fight in the Mexican-American War, where he reached the rank of brigadier general. At this point he hurt his knee falling off a horse and missed all the battles he had a chance to fight in.  He had three sons with his wife, Jane Appleton Pierce—two of whom died in infancy and at the age of four, respectively, and the last one…well, okay this is pretty bad.  Ready for it?  His third son, Benjamin, made it all the way to the age of 11.  Then, a month before inauguration, the Pierce family were riding in a train from Boston when the car derailed and Benjamin was crushed to death—nearly decapitated, which of course Pierce and his wife got to see, first hand, themselves. Like, Jesus. 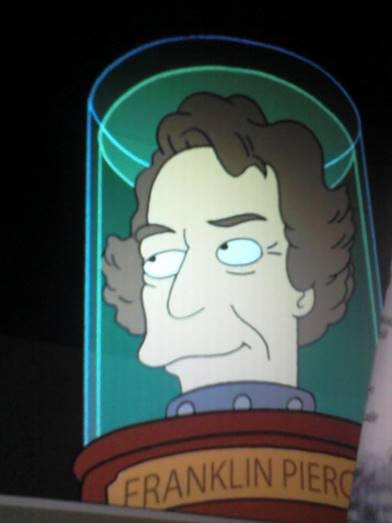 Oh, fuck, we thought putting in a Futurama cartoon picture of Franklin Pierce would bring some levity to that whole story, but then we remembered the whole decapitation thing and we think we just made it much much worse.

Anyway, Pierce was the youngest president to serve at the time, taking office before his 50th birthday. He also was the first president to take his oath of office on a law book, as opposed to a bible, and he was the first to delivery his inaugural address completely from memory. That last part is impressive because this is not an article about dead kids [editor’s note: are we fucking sure about that?] but rather, about drinking, and holy hell, did Franklin Pierce drink.

What with the dead kids and the wife who spent all her time locked in her room writing letters to her dead kids [editor’s note: Jesus Christ, tone it done on the dead kids] Pierce spent most of his time in the White House getting nice and soused.  He was known to drink Madeira by the case, and could throw back a hot rum punch with the best of them, but really would drink just about anything.

Of course, the most telling story for Pierce’s boozing was the quote at the top of the page, which is about the most hilarious presidential quote about boozing. Pierce wasn’t a good president, and didn’t even get nominated for a second term by his party (he barely got that initial nomination in the first place) but he still goes down as the hardest drinking president in American History, and the only president who can warrant an AFFotD article that primarily focuses on their dead kids. Well, other than Teddy Roosevelt, but that was way way different.

This entry was posted in Our Greatest Presidents, The Other Guys and tagged America, America's Drunkest Presidents, Franklin Pierce. Bookmark the permalink.