~Oh shit, this isn’t our car

A while back, we showed you the Midwest of America through a drunken Road Trip filled with giant, oversized objects that were made by small towns for reasons that we can’t explain without having high concentrations of pesticides in our lungs.  So when we decided that we should focus on some other states in the nation, since apparently this nation’s pretty fucking huge.  So, we decided to start things off in Tennessee.  If you read that last sentence and thought, “Huh, I wonder where in Tennessee they would start off?” we guess we haven’t properly introduced ourselves.  Hello, we’re AFFotD, if you came here because you googled the phrase “How to Tie a bowtie” we have some bad news for you.  For the rest of you, we’re sure you’ve already shouted, “Knock it off with the fluff exposition, we know goddamn well you went to the Jack Daniels distillery.”

Of course we did.  Of course we did.  So how we woke up in Powell, Tennessee with a stolen car and a taste in our mouth that reminds us that it’s still legal to smoke in the bars down here, which is as good of a time as any to begin…

So we’re here in Powell Tennessee, the land of…uh… 13,000 white people and 100 black people?  Eesh.  Come on you guys, that’s just embarrassing.  We’re betting that if someone were to talk about Watch the Throne here they’d ask what Otis Redding has to do with observing bathrooms.  But then again, what they lack in diversity, they make up for in gas stations that sort of look like old-school airplanes.

Haha, what the hell, how are we supposed to react to this?  The owners are full of expectant smiles when they describe how this is the only gas station in America that’s shaped like an airplane and… you know, we can see how it sort of looks like a plane.  It has a wing.  And sort of…propeller like stuff… but really it feels a lot like when your five year old niece gives you a picture of a bunch of stick figures with writing that says “Me,” “Mommy,” “Uncle Smells Like Sad Juice” and you have to keep a straight face as you tell her how great of a drawing it is.  “Oh wow, that looks just like us.  And it’s not called Sad Juice, it’s pronounced ‘wisk-key.’”

But the owners are really gung-ho about this.  And when we got to the side and saw this sign… 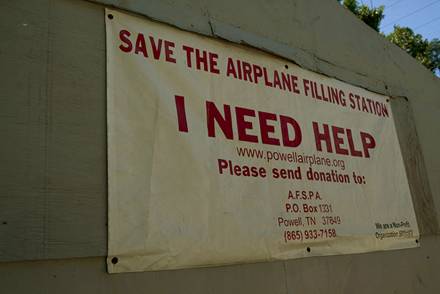 We knew we had to get out of here.  So we head over to Pigeon Forge, where we were told by some seedly looking locals that they had something that “Damn tourists loved to go to.”  Boy were they underselling the glory we encountered. 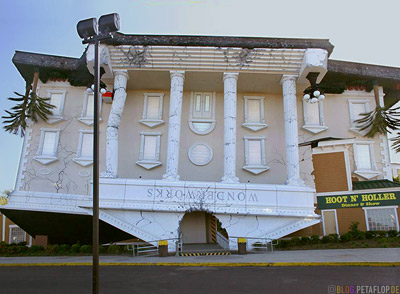 Holy hell look at that.  This building is upside down.  It’s fucking upside down!  You can actually see the various stages of lunacy that were involved with making this…uh…”Amusement Park for your mind.”  Wait what?  Holy shit there are four of these scattered throughout America.  We’re pretty sure we’re observing an instrumental part of the plot of The Fifth Element with this, then…wow that just blew our minds.  And adds another level of insanity to this thing.  So, the planning process probably went something like this.

WonderWorks Founder:  I have lots of money, but I want to use it in a way to make more money in the craziest way possible.

WWF:  Oh…okay.  Sure.  Yeah, no, I can see that being an attraction.  Yeah, we can put like, mazes and optical illusions stuff in there, and since it’s an updown building we can charge a crapload for admission just because it’s so strange.

TFIA:  AND THE UPSIDE DOWN BUILDING WILL HAVE TREES!  FAKE TREES!  THAT ARE ALSO UPSIDE DOWN!

WWF:  No, we get it, the building is upside down…

WWF:  Oh…okay, sure, but yeah, let’s flesh this out about

TFIA:  OKAY I’M MAKING FOUR OF THEM NOW BYE THANKS FOR THE MONEY!

Moving on, we hit the state of Kentucky, known for its bourbon and…uh…horses, right?  Yeah.  Wait.  Wait.  Slow down the car.  What was that billboard?

NO!  Okay, we are absolutely turning back to get to Cave City, Kentucky, so we can go to this place.  Jurrasic Park is real you guys!  Of course, these dinosaurs here aren’t real (dammit) but what they lack in “ability to eat you” they more than make up for with “occasionally being hilariously anatomically impossible.” 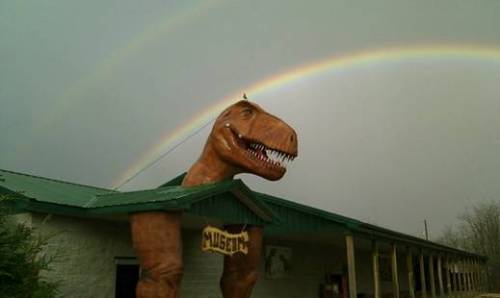 By the way we should absolutely point out that, apart having an entire park filled with fake, giant fiberglass dinosaurs, this town with a population of less than 2,000 also has a motel that looks like this.

Holy crap, that’s amazing.  We’d absolutely want to stay in there (and make, just, the most insensitive Native American jokes the whole time, you have no idea).  But we have a tiny church to go to.

If you recall, in one of our previous road trips we found a tiny church in Minnesota.  We thought that this was pretty much a one-time thing because, let’s face it, tiny church?  But when we saw “Barbourville, Kentucky” on the map and went there because for Freudian reasons we read that as “Bourbonville” we were happily surprised to hear that there was another tiny church, and it was located right there.

That is…a tiny church. Although, does it make us jaded that we see this and our reaction is, “Eh, we’ve seen smaller”?  We should just say, “that’s a tiny church” and enjoy the fact that it is an impractically tiny church in what appears to be the middle of a large empty field.  It’s probably the disappointment that the town isn’t actually called Bourbonville.  We were trying our best to hide it, but that really bummed us out.

So, in taking a break in this particular road trip, we are going to spend the night in West Virginia.  But where could we stay that would satiate our desire to be both American and to come down with black lung? 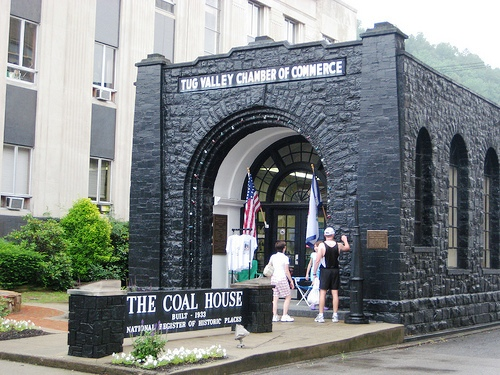 …Yes.  Thank you, Williamson, West Virginia.  That’s as good of a place to call it a rest before we try to explore more of this fine state, and this fine nation.  But until then, time to get drunk in a house made of coal.